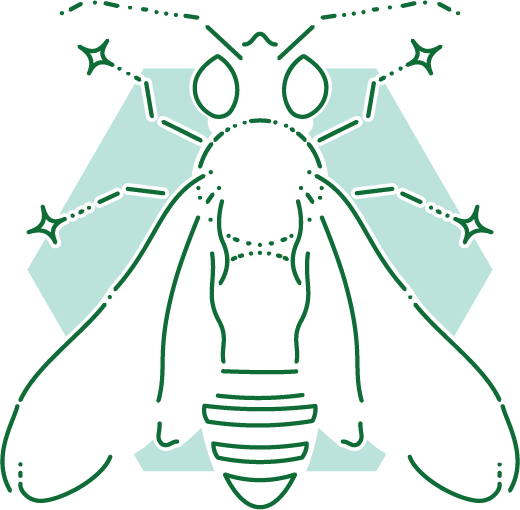 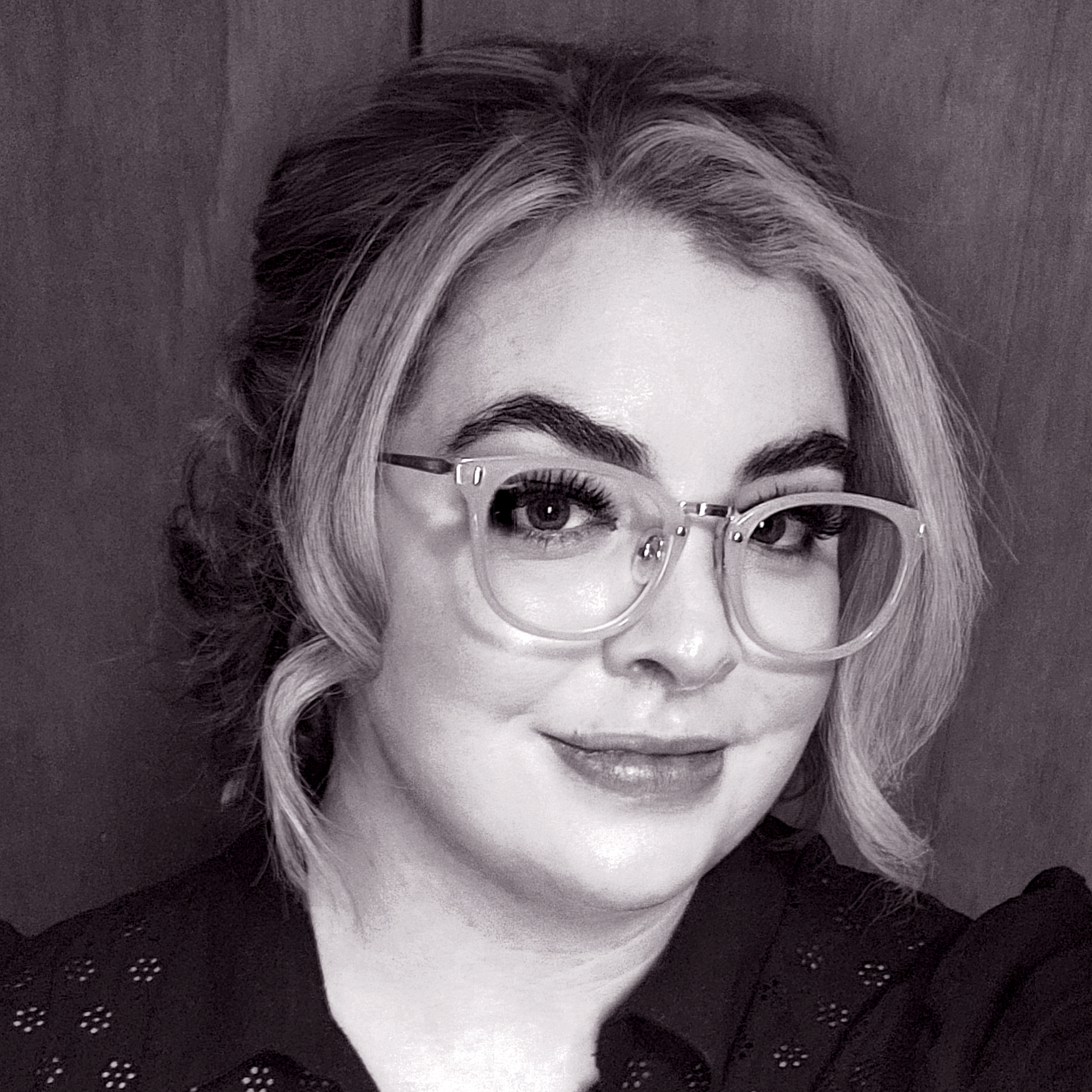 Create a solution to indecision. Or at the very least help people come to decisions quickly and feel more confident about their choices. 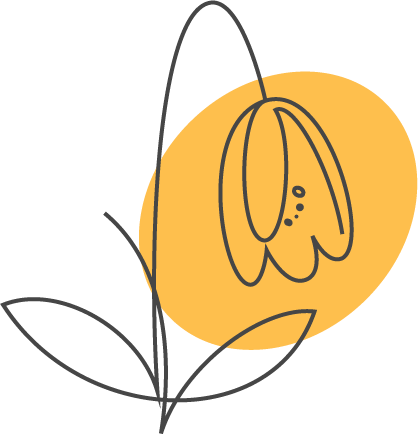 Capstone project for a Graphic Design degree. Come up with a social problem that needs to be solved and discover the best solution through researching, prototyping, and testing the outcome. 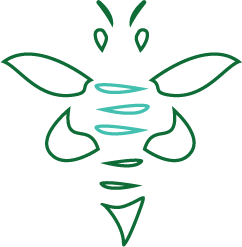 In the book, Color: the secret influence, by Ferhman, I discovered that honeybees see ultraviolet light which helps them know which flowers to land on. This influenced the name Honeybee, stating we were giving them direction on where to go. In this book, I also discovered that the colours our eyes absorb the fastest are warm green, while active during the day, and robin egg blue when our eyes are in a resting state at night.

Since my project had Designers as the primary target audience I spent a lot of time learning about colour theory, psychology, and physiology. As well as the way colour deficiencies affect our vision.

Out of all the colour psychology across cultures and demographics green was the most consistent when being reported to positively affect our decision-making skills. 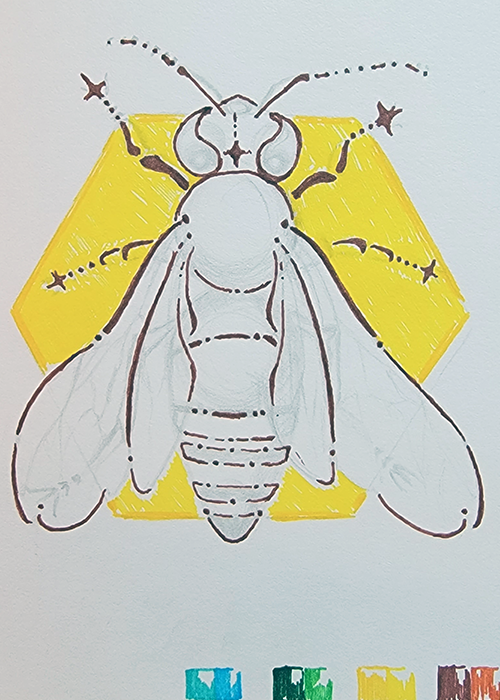 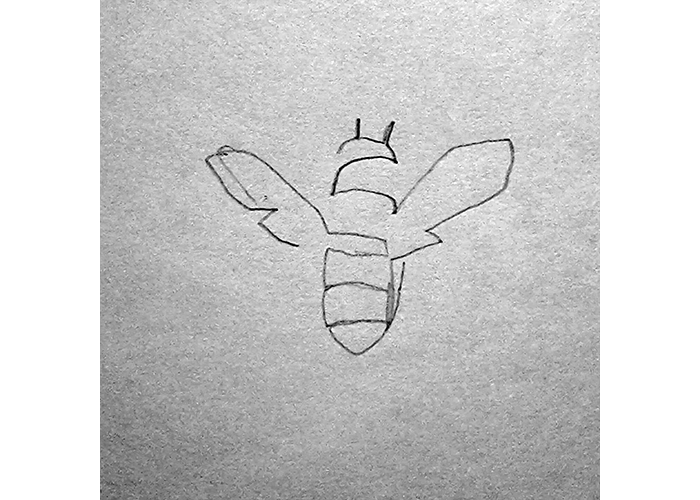 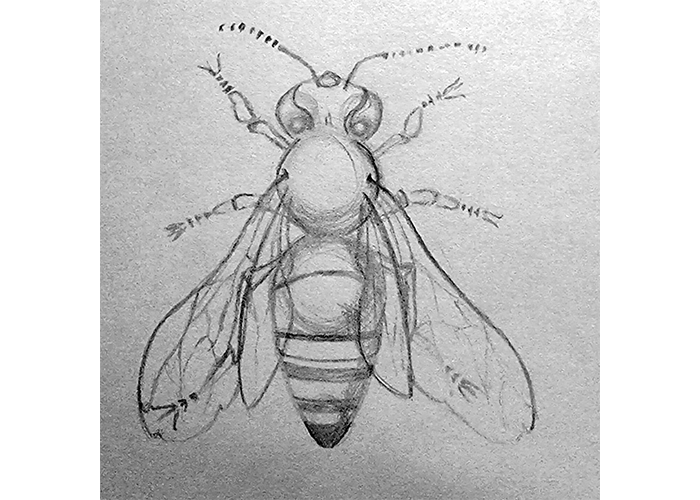 After collecting the colour information and the survey results I made infographics and illustrations describing my discovery. I also sketched out a logo that I refined into a mono-line, bohemian-inspired design with the two colours I found out are the easiest to digest.

The logo influenced the rest of the designs, creating continuous line illustrations to support the deliverables. 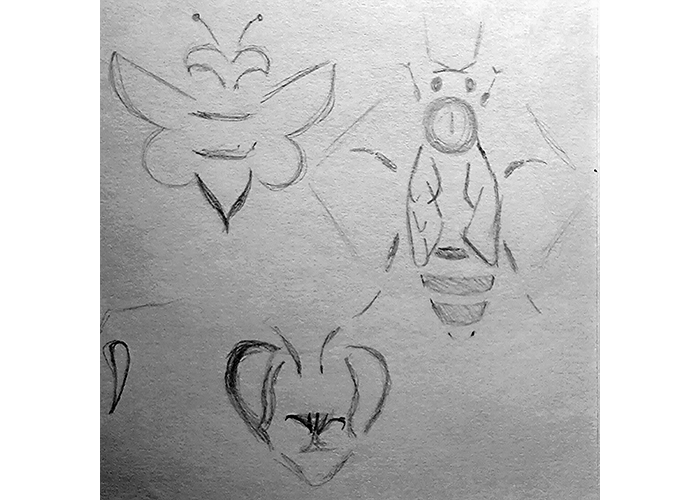 Created infographic colour psychology cards for quick access to design knowledge. This would help designers make more informed decisions about colour quicker. This solution was intended as a line of quick information guides that are pocket-sized and easy to access. 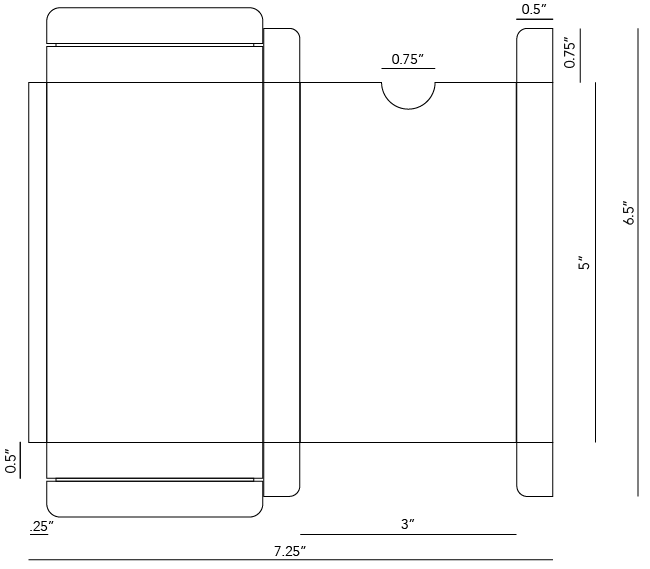 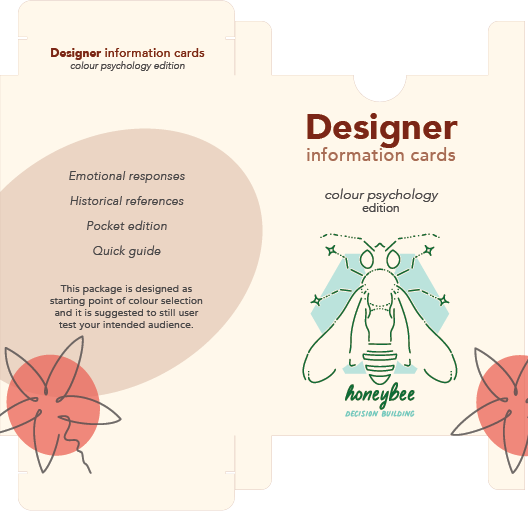 I thought of the idea of creating a fidget ring, as people who struggle to come to decisions tend to fidget with something to help keep them focused. But this ring would double to help make decisions, similar to the novelty of a magic 8 ball but a lot more discreet. Whatever a symbol lands in the raised shape it would tell you ‘yes’ or ‘no’ to the action you were contemplating. 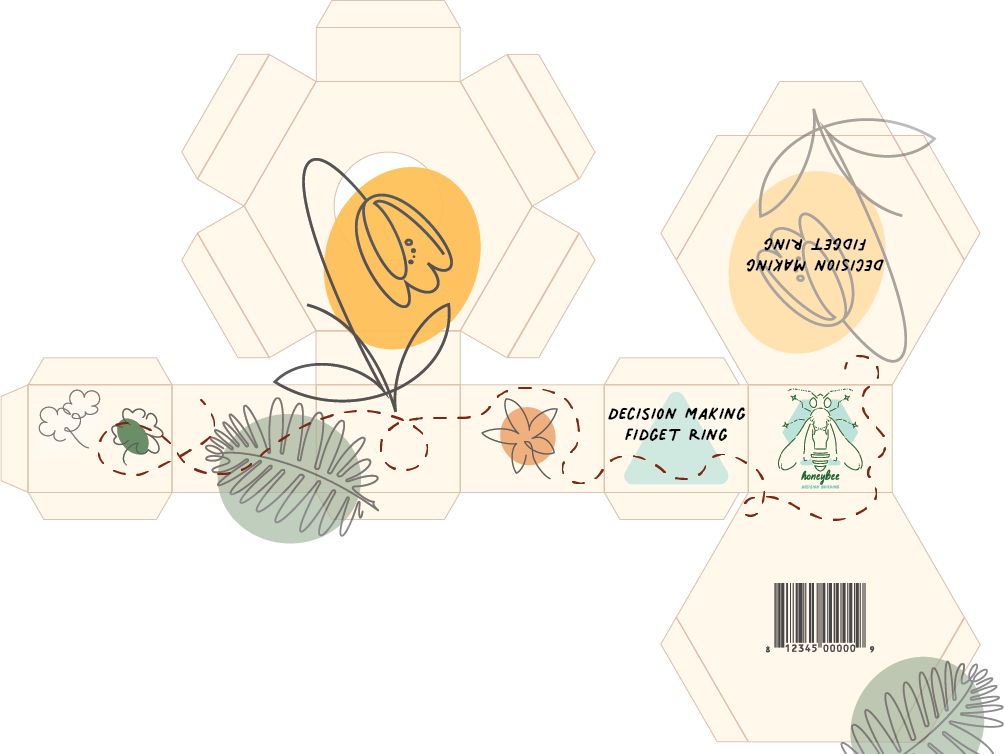 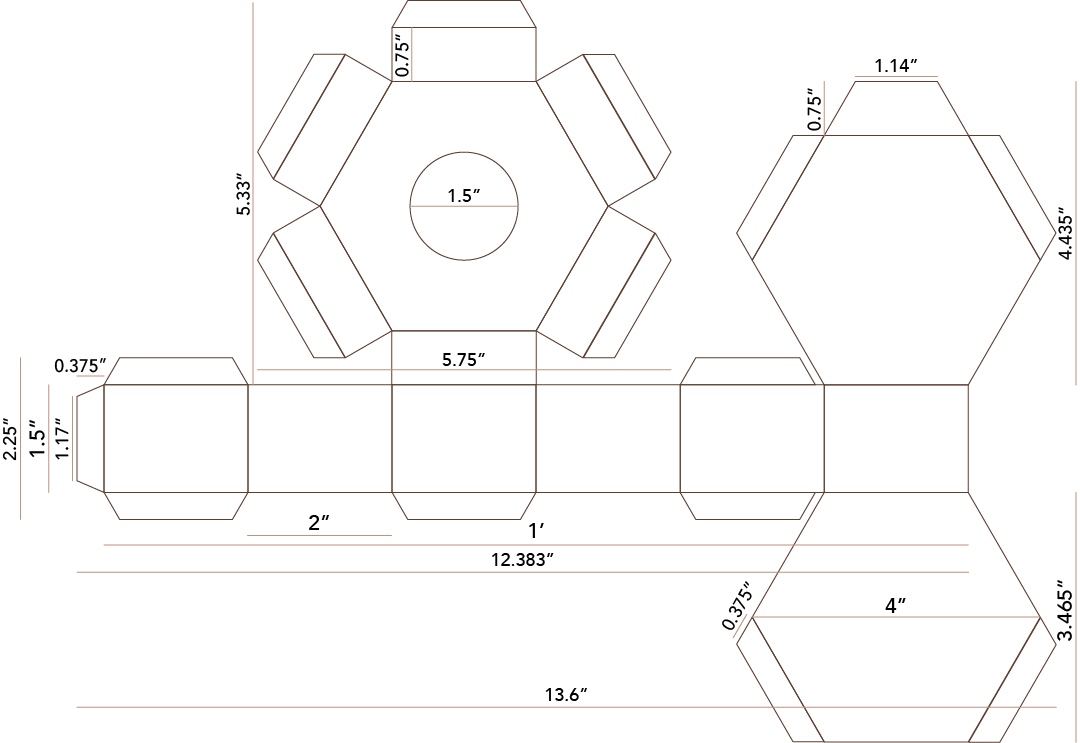 Creating an app that acts similar to the ring, but gives you rewards for exercising your mind and memory. The app would have daily challenges and tasks that you can set for yourself encouraging you to keep going. Each task and challenge completed would give you a key or token to unlock the decision spinner, which acts like the fidget ring but it can be customizable.

The disclaimer to the spinner is that the answer you land on doesn’t force you to act on it, but allows you to realize how strongly you feel about this decision. The idea behind the keys is so that you are not relying solely on the app but making sure you are exercising your brain with challenges that will help you feel confident about your own decisions.

While I do believe I appropriately solved the problem, the statement I chose doesn’t have a one-size-fits-all solution. There is no definitive end to solving indecision, but I do believe I created a solution to help people become more confident in the choices they make.

With the tools and knowledge from Honeybee people would be able to exercise their minds and also have a place to ask about their decisions when they feel less confident. Also, bringing attention that people are not alone when they struggle to make decisions can help them feel supported in reaching out for help. 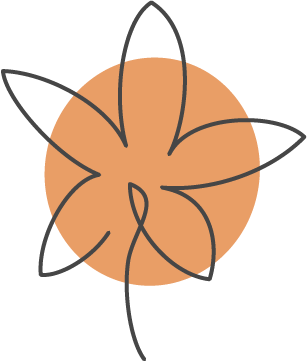 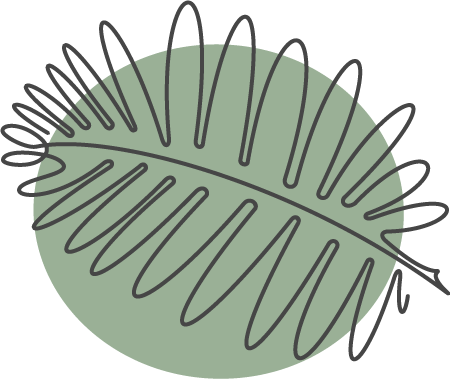 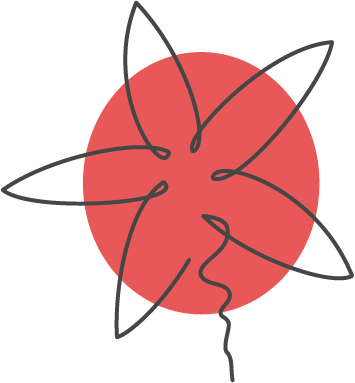